Getting Started in Backyard Food Production 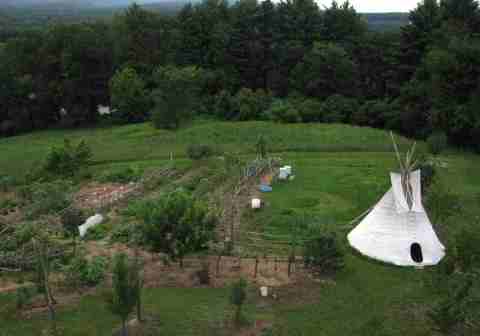 There are numerous books, organizations and websites about "sustainable farming and food geared for practitioners, to learn, specialize, trade ideas and hone their skills and knowledge.

But there is uneven support for the enthusiastic amateur looking to start out in backyard food production. Decades of Earth Days, cancer scares and Mother Earth Newses notwithstanding, today, many well-meaning, first time food growers are stymied each year by basic obstacles, like a lack of water, mulch, seeds or a good source of compost... Others are frustrated and turned back by the lack of a caring mentor. Still others never even get started due to a series of insidious assumptions and false beliefs about the difficulty of backyard food production. 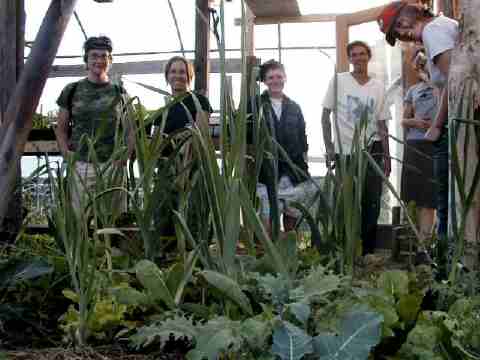 In the future, our food supply likely will depend more on local, micro-farms and other small acreage operations wedged into urban and suburban landscapes. Collectively, we cannot afford to each make every classic mistake and reinvent the wheel in every backyard. Today we have the benefit of a growing body of sustainable farming knowledge which suggests viable possibilities for a saner, fairer and more localized food paradigm. "Organic" principles and methodologies have been with us long enough to have been tried, tested and integrated into horticulture, food production and land management practices, both in the west and the developing world.

State of the art food knowledge, native resources, and seeds are actually publicly owned commodities and ought to be widely disseminated to the people who want and need them. Experienced food growers must offer to mentor first timers into the fold... Any aspiring food farmer anywhere, who's willing to put in the time and sweat should have the benefit of the best seeds, support and information available. ...Nor does teaching basic farming skills to the masses 'put the farmer out of business' since, come what may, the need to eat and the demand for quality produce is only going to grow! 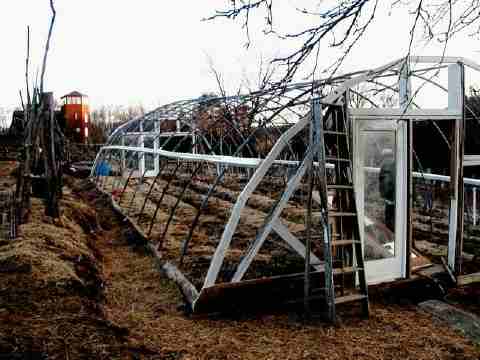 Growing backyard sustenance is one obvious way for many of us committed eaters to build family and neighborhood food security into the future, no matter how high the price of oil rises. But too many well-intentioned gardeners and 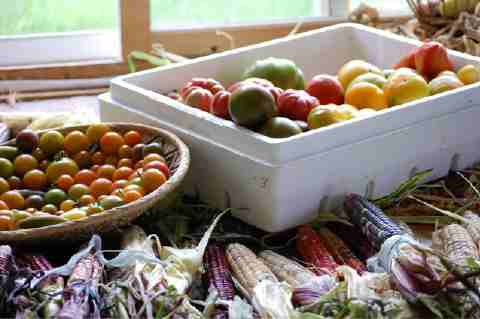 other would-be food farmers are inhibited, frustrated or wholly turned back by fundamental obstacles... the shortage of arable soil, compost, a lack of time, of knowledge, experience or a simple lack of coaching and support. Even experienced growers struggle more than we might and sometimes fail to see or fully exploit the "easy ones". But there is no edict or moral code that says food farming has to always be arduous or the learning curve always steep.

Our collective farming mission these days should include helping more rank beginners get started growing "permaculture"-style food gardens, on limited space, non- traditional, niche plots, using the best practice, micro-intensive, organic techniques. In other words it's time to enlist more folks that have never sown a seed, and teach them basic food literacy and organic growing skills. Not just the young, WWOOFer-agronomist types, mind you, but nearly anyone who eats and wants to continue needs to be so schooled. Sustainable food production in the future will likely occupy suburban backyards, urban lots, community garden plots, "container" gardens, even rooftop gardens, everywhere! We’re going to need lots more savvy practitioners of this "pragma-cultural" food revolution.. 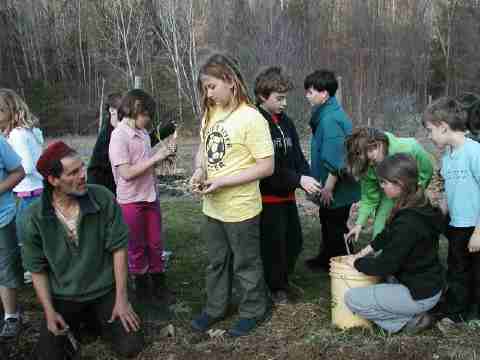 To enlist and energize millions of new niche farmers calls for nothing less than a “Victory Garden”–like campaign matched with a culture-wide, consciousness-raising around our true, national passion: food. A tall order but at least today we have the benefit of history and hindsight, of Stout and Jeavons, of Mollison, Coleman, Salatin, McKibben as well as many other visionary, green voices plumbing the vital connections between our agriculture, food, food systems, public health, energy choices and world politics. And now, we see cutting edge authors like Michael Pollan and Barbara Kingsolver further widening the pool of citizen consumers with a more nuanced understanding of their food. This time the backyard “victory garden” won’t be simply a temporary measure to support a war effort, but a permanent and pragmatic adjustment to the changing times.

Under even the best scenario, raising food crops by hand involves serious labor, uncertainty and risk. Whether newbie or old-pro, we should all be shamelessly looking for those great shortcuts, the easier, smarter, more efficient and ecological ways to grow, harvest and preserve our precious food crops. Taking the "easy ones first" means learning to recognize existing land, plant, animal and people resources and letting/helping them do what they do naturally. It means working closely with the on-site forces, like gravity, wind and decomposition. It means planting more brassicas to over-winter, rather than fighting flea beetles in spring… and extending their harvest on the leeward side of the house in fall. It means integrating the gleaner's consciousness by eschewing the new, while taking more advantage of the ubiquitous and the free (animal wastes, leaves, rain, ideas, rotten hay…) starting in your own yard. 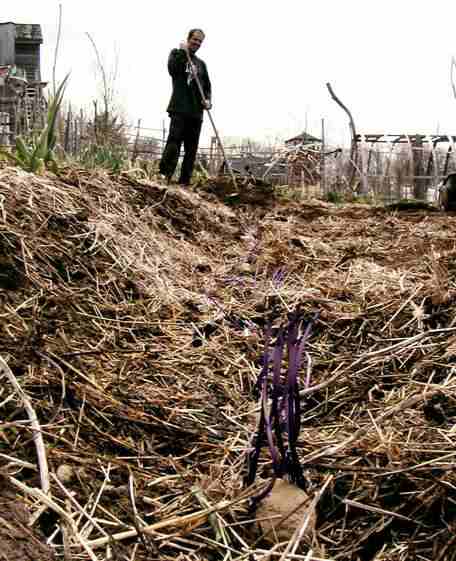 Compost is the obvious example of this elegant engagement with nature to grow healthy soil, hence good food, anywhere. Compost ingredients are often ubiquitous and, once assembled, the pile (or windrow) needs little human intervention. Sure, you might speed things by turning it once or twice. But if you don't, it's still going to decompose into valuable organic matter and nutrient-rich humus. Utilizing worms is another "easy one" since, season after season, with a little help, they readily do their brilliant soil building work for free. All the beneficial critters, in fact, the lacewings, dragonflies, bees, parasitic wasps, etc, can be "easy" since they're simple to attract and do their horticultural work largely unsupervised. We leave remnant alliums to overwinter in our gardens and hoophouse, which throw a pungent bloom in early spring, which in turn brings back many beneficials. And the leeks, green onions and assorted shallots aren't bad either.

No-till farming is another prime example of a "permacultural" shortcut, since, when it works, it can eliminate hours of work (plowing, disking, etc.) and the need for machinery and fuel. Through successive, layered, "lasagna" applications of mulch (such as hay, manure and/or compost), the soil/bed is continuously protected, loosened, enriched, "leavened" and microbially enhanced from the top. It can then be planted or left fallow, either way improving its overall fertility and tilth. In this manner we've farmed 2-1/2 acres for six years now, owning nary a tractor or rototiller.

Sprout gardening is an example of an "easy one" which even many green consumers forget to exploit. What could be easier than rinsing a jar of sprouts daily in your kitchen? Not only are edible sprouts delicious, nutritious and widely diverse, but some sprouts (broccoli…) contain potent anti-cancer agents as well. And what could be more local than growing salad in a jar?! 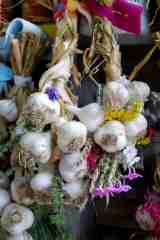 One freezing November, worried I'd underplanted garlic, I took a bucket of undivided bulbs and dropped several dozen of them unceremoniously into the icy soil. I then covered and mulched them with hay like any other garlic. Within weeks the entire farm was frozen solid. In the early spring, as I'd hoped, these whole bulbs sprouted into dense, green clusters. At about four inches, I scooped them out, separated the individual sprouting cloves (easy) and transplanted them singly into long, fertile beds, in a grid, three deep. They hit the ground running with no transplant shock and grew rapidly, yielding heavily (and early!) as did the many hundreds planted in the exact same manner one year later. Now, six years hence, this little accidental "shortcut" has become part of our late fall regimen as we relish all the "extra" effortlessly over-wintered and preserved for spring "installation". 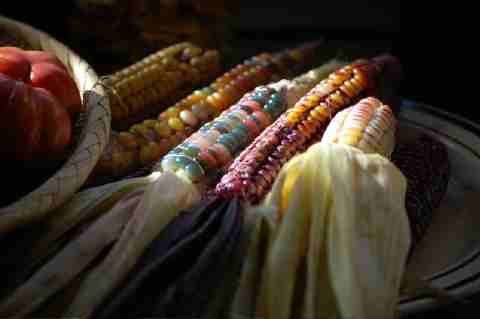 Heirloom seed saving is a supreme example of reaping the windfall nature conveniently provides. Many food crops have cross-pollinating tendencies, like corn and squash and so cannot be effectively saved year to year without careful isolation and hand-pollination schemes. However, with self-pollinating (non-hybrid) crops like tomatoes, peas, beans and many flowers, nature makes it easier. These crops breed largely true year after year and will produce quantities of readily collectable, mature seed, with hardly any human intervention -other than the knowledge, will and timing to collect and save them. The unfathomable diversity of genetic traits held within these seeds is one of nature's greatest gifts to sustainable growers large and small. This fall it took me about 20 minutes to save the seed from three (3) fabulous, late season, exotically dark, bi-colored "black pineapple" (Ananas Noir) heirloom tomatoes. I scooped and fermented them (for a week) rinsed, cleaned and dried perhaps 500 of these rarefied seeds. That’s a decade's worth of Noir seed, which might actually provide stunning results for dozens of farmers, all over the globe. A fine return on a 20-minute investment!

Even if you don't save seeds, perhaps the easiest food growing technique of all is to cooperate with plants' habit of spontaneously going to seed in the field and re-growing into valuable, albeit accidental, "gift" crops. Although some complain about the invasive nature of some such self-seeders, we gratefully glean a timely bounty of self-seeded cilantro, sweet peas, sweet William and leeks. We've also had bountiful harvests from the natural re-seeding of lettuce, kale, alliums, calendula, dill, cosmos, amaranth as well as heirloom beans and even butternut squashes! We've always happily and easily ignored, shared or eliminated unwanted extras. 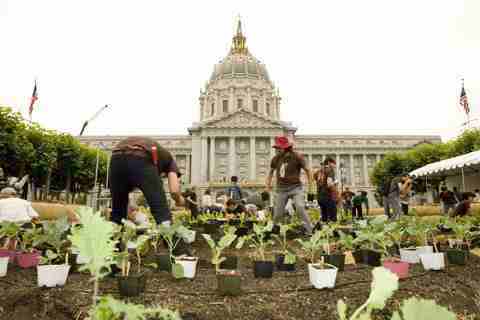 Another key short-cut area for the small-acreage food farmer is the rampant and unabashed use of transplants. We began shifting several years ago, even with traditionally field-seeded crops like corn, beets, pole beans and squash. I could no longer stomach erratic germination and seed loss caused by cold soil, pests, disease and rot, not to mention extremes of rain, drought, etc. We found that growing nice seedlings to favorable transplant size was relatively easy, and cheap, and allowed the flexibility to decide when and where and how to plug them in. As another time saver we began custom mixing and growing small batches of blended greens seed for growing (in trays or beds). Whenever the weather becomes favorable (wet and mild), we kick into action, 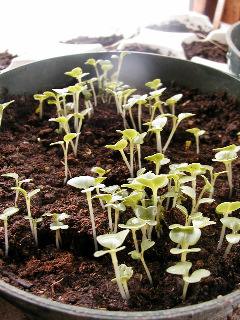 transplanting vast grids of custom-mixed adolescent lettuce, spinach, bok choi, tat soi, beets and any other greens at whatever density, ratio and spacing we may desire. If the weather isn't favorable, we can hold them back a week or more. After their crowded start, seedling greens and other transplants will root and mature quickly in spacious new homes. The key is timing, with small batch, succession plantings being best. Even a small tray of mixed greens represents a lot of cut salad (or heads) once they've all been pricked apart, transplanted and grown to maturity. Under favorable conditions, even the cut-off stumps of lettuce, etc will re-grow more edible salad leaves and small heads, although many gardeners don’t bother.

No food farmer, whether newbie backyarder or veteran grower should be reinventing the wheel. Besides becoming cleverer, more pragmatic and native-adapted in all our efforts to produce substantial and sustainable food harvests on smaller and more marginal pieces of land, we've got to aggressively share these essential skills and principles, starting with the "easy ones" with regular folk who are slowly coming to realize the vital importance of eating sustainably over eating garbage, and of micro-farming over micro-waving.

Some things anyone can do to get started growing food...