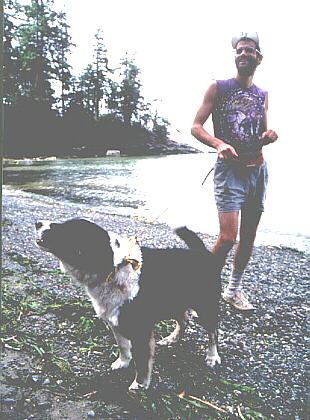 Topher barking on the beach in the Northwest, circa 1992 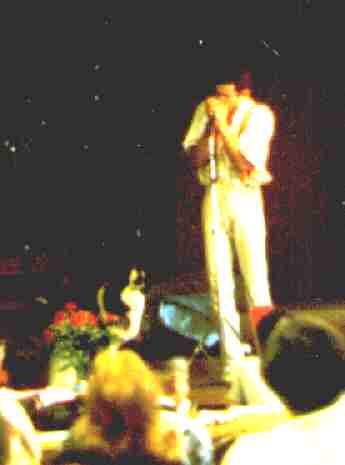 With great sadness and joy we share with you the recent passing of our wonderful dog friend, Topher. Known also as "Tophie", "Tofu", "Fotor", "Fotie" and "Tofish", our little buddie's unusual life spanned ten years of travel, friendship, work and adventure, rare even among two leggers!

This winter, Topher was unexpectedly stricken with a ruptured disc in his neck. He bravely endured a month of failed treatments and unspeakable pain before we decided not to subject him to a radical surgury and the post-operative life of restriction and decline he faced.

Topher, a fiesty and athletic border collie, was born on the south coast of Maine around 1986. By the time he came to Wendell, Massachusetts, a year and a half later, he'd already known three well-intentioned but incompatible homes. Although everyone who knew him loved him, it seems that nobody could deal with his high strung and wandering ways. Those familiar with this breed will attest to their intellingence, their desire to work and their absolute inability to be tied or 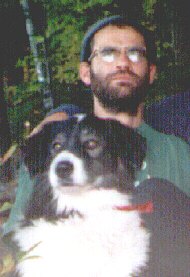 contained. Indeed like "Fly" in the Academy Award winning movie "Babe", Topher was a bright, articulate and enormously social creature with great expectations of life and of himself.

Topher came to me unexpectedly at a time when I was injured and deeply depressed. He entered my house (on a "one week trial" basis) peed on the woodstove and commenced a ceseless, ear-splitting bark which spoke of his great confusion and loneliness.

In retrospect, had I too not been in such a state of confusion and despair, it's unlikely I would have kept him since it took seven months before Topher stopped whimpering in his sleep. But dogs, we all know, are notorious healers and heal he did! His therapy included riding in the front seat of my car and accompanying me everywhere, plenty of bed rest, petting and table scraps along with unconditional love and attention. (how could it fail?) The transformation, when it finally came, was dramatic and, although he never fully resolved some of his abandonment issues, he finally understood he was home, and even gave up wandering.

One of Topher's crowning achievements was his work as adjunct therapist and friend to the severely abused adolescent boys at the Lake Grove School in Wendell. Pureheart Topher was often more effective that I (the social worker) at reaching and softening those traumatized youths. They would come to the therapy room, sit (sometimes for hours or

days) on the couch, with Topher, and then, only then, begin to talk.

I remember two boys in particular, Scott and Bruce, both completely shut down, defiant, "unworkable" sex offenders on their way back to juvenile lockup. I truly believe it was the special bond they each found with Topher, the safe, unconditional, non-sexual touch, perhaps the first ever, which coaxed them finally to open a bit with me, accept help and avoid jail. I watched Topher matter-of-factly perform this miracle over and over again. Unfortunately, in a fit of ignorant and vindictive authority, the owners of the school later banned dogs (read: Topher) from campus. Even then, Topher remained a presence there, a beloved, talked about friend, symbol and mythic icon until years later when we both moved away.

I like to remember Topher's supreme enjoyment of the Vermont Rainbow Gathering ('91) which we attended with our dear housemate, R and her dog Gulliver. After we arrived at the Gathering and established our camp, Topher merrily set off each day to explore the thousands of acres of forest, the diverse community of people, dogs, kids and communal kitchens -- truly a dog's paradise! For a day or so we worried about Tophie, not seeing him for so many hours on end. Some times we'd see him coming or going on the paths to main circle, always smiling, always on a mission. But each night, when we returned exhausted to camp, there he was, sleeping contentedly next to my tent.

Topher was a beloved fixture in numerous circles. He performed twice at the Wendell Full Moon Coffeehouse; he was well known to the homeless and grundge populace of Pulaski Park; he was a founding me 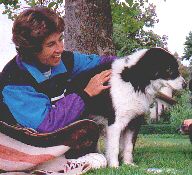 mber of my men's group; he attended four Footbag Worlds (Championships) in Colorado and San Francisco as well as numerous regional festival, concerts, and tournaments. He was a long time mascot of the Division of Education at Family Planning of Western Mass and he also kept up with scores of canines and humans across North America, friends cultivated during four unusual cross country road trips.

Two years ago, as fate would have it, I fell in love with a non-dog loving person. Over time, Topher performed the ultimate feat of magic, slowly, persistently melting her resistence and weaseling his way into her heart, becoming her dear friend, companion an 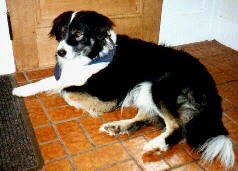 d teacher, too... Here is what my partner, Jannie Morton, had to say about Topher's passing...

"He was a dog of joy, of squirrels and running dirt roads, a good dog, a dog who pranced instead of walking, who sang with harmonicas and howled with us at full moon fires. He loved open meadows, meeting new friends, the smell of the wild, road trips, campsites, chicken dinners, salmon feasts... and most of all, us! We loved this little doggie, our "Tofish". We are blessed and grateful to have been part of his family... It hurts not to have him here to cuddle with, to walk with, to open the back door of the car for. We honor his living, his love of life and the richness he brought to us."

Thank you, Tophie. We miss you and love you. Safe crossing...

With Love, Danny and Jannie