Gone But Not Forgotten

On March 4th of this year, our precious friend Sheba died. Though still game, she had a rapidly progressing bone tumor in her shoulder and after postponing the inevitable, I finally decided to release her from her aging body. Dale broke through deep snow and we buried her, with great sadness, in the frozen tipi meadow in Wendell, Mass. Good-bye Sheebs...

Words can scarcely capture the breadth of Sheba's unusual dog life nor the deep love and admiration we had for her. Known variously as "Sheebs", "She-bear", "Sheebie", "She-box", "She-beast", "She-barks", and of course, "Sheba", she touched thousands with her vibrant spirit and compelling way. Sheba was a one of a kind - a wise and wonderful being wrought of love, adventure and the great outdoors.

Born in 1974, Sheba was rescued in 1975 from the Aspen, Colorado dog pound on the day of her scheduled execution, by Lezlie Namaste.

During the next 13 years, Sheba knew over 25 different homes and several primary caretakers. But wherever she roamed, she never failed to earn the affection, respect and a place in the hearts of young and old, beast and human.

In her time, Sheba knew homes in Colorado, New York, Ohio, Washington State, California, Oregon, Texas, Minnesota, Maine and Massachusetts. She crossed the USA over 20 times, 10 hitchhiking! ...Sheba swam in both oceans, the Gulf of Mexico, rode in planes, buses, 18 wheelers, R.V.'s, Cadillacs, vans, hearses, police cars and untold hundreds of pickup trucks. Sheba served as work mascot one year for an Oregon State Forestry (treeplanting) crew. She served on staff at the New Salem Academy, as "adolescent therapist" and "nature consultant" for that alternative high school. In her prime, Sheba was an accomplished rock climber and mountaineer and she scaled peaks in every U.S. range.

In her travels, Sheba visited several communes, labor camps and working farms. Never one to sit idle, she participated in demonstrations, marches, work parties, learning retreats, weddings, celebrations, potlucks as well as dozens of outdoor festivals and concerts. Sheba even attended three universities and became a regular fixture at Antioch and Evergreen State. Later in life, Sheba graced us with her presence at two glorious Rainbow Gatherings, in Pennsylvania and North Carolina.

Sheba was the quintessential road buddie. She simply loved to travel and wasn't concerned with motive or destination. She came alive with the adventure of the road; a salmon feast in the Redwoods; bedding down on a breezy sand dune in Oregon; coyotes wailing across the Montana prairie.

Aside form being my best friend and traveling partner for a decade, Sheba was also my teacher. She taught me the wisdom of living in the NOW, the simple virtue of engaging life totally, without hesitation, doubt or regret. Sheba also showed me how to love all people, melting the defenses of even the cynical and mean with her unbridled positivity. Incredibly, she did this while also maintaining her fearless nightly vigil. You can love people and protect yourself, she taught me.

Finally, Sheba taught me that the formula for personal happiness rests ultimately within. Whether hiking in the glorious Rockies or hitching on I-90 in a blizzard, Sheba always emanated a deep, unshakable aura of contentment. She did not question her role in life nor harbor complex expectations or fears of the future.

Instead she gave freely from her heart, pouring out her boundless life force, moment by moment in a dazzling, doggie dance that humbled us humans, so often lost in our heady, calculating worlds.

Sheba devoured each new day, every experience, like fresh, dripping salmon steak! She loved traveling so much that merely picking up my red Jansport pack used to send her into spasms of excitement. And what an amazing traveling asset she became over the years, smoothing the rough edges, accompanying and protecting, getting us rides, sharing the excitement of the time and reminding me of the simple truths. Sheba was so fully present, so completely herself, it became entirely impossible not to do the same in her presence. People everywhere were struck by her strong presence, her smiling disposition and golden beauty.

Even on the day she died, unable to use her front leg, Sheba still had to go snortin' and sniffin' and rollin' around in the freshly fallen powder of the tipi meadow!

I will never forget Sheba. I am so thankful that I - as well as many, many others - appreciated her and realized during her lifetime what a precious gift she was. And, Sheba herself seemed to deepen, soften and grow ever more amazing through the chapters of her life, in the glow of all that love. To her we dedicate this "dog shrine" page.

Blessings to you and all yer doggies, 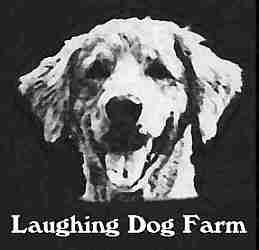