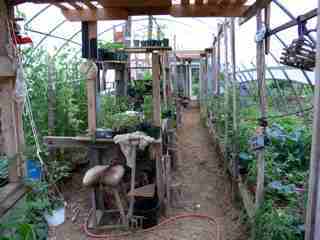 2012, now officially the hottest year on record, thrust into our consciousness the graphic and unmistakable effects of climate change, with melting polar icecaps, widespread crop damage in the heartland, and whole communities devastated on the Jersey shore. But what does this mean for the millions of gardeners, small-scale farmers and other micro-producers across the land who’re trying to grow food for their families, their friends and their neighborhoods?

Today, people of all walks, from gourmet chefs, to urban activists, to cancer survivors, to soccer moms - even schools, cafeterias and businesses are finding new reasons (and ways) to join the real food revolution. Add a stagnant economy, plus ever-spiking food prices and you have the unique, historical potential to transform millions of unlikely greenhorns into potential backyard farmers! However, ironically, this wave of newly-inspired, small-scale food producers coincides precisely with the most extreme and dangerous weather ever recorded! Severe storms, droughts and temperature spikes across vast swaths of the nation (and planet!) are having a withering affect on all kinds of growers, including many in the Connecticut River Valley directly hit by flooding from hurricane Irene in 2011, the sixth costliest hurricane ever. Farmers also suffered catastrophic Irene losses in N. Carolina, Virginia, Maryland, Vermont, New York, Pennsylvania and beyond. Then, last year, an unprecedented mega-drought lingered for months across our nation, devastating crops and livestock, sparing neither experienced nor newcomer, neither large farms nor small.

Farmers of all sizes should be very preoccupied with the unpredictable new climate outlook. What weather patterns are now possible? What will be the “new norm”? What kinds of technologies, philosophies and/or methods could possibly buffer our crops and farms from its manic extremes? And what does climate change say about our collective ability to even keep farming at all?

Every generation of farmers has had to deal with the mortal consequences of capricious weather. Even for the most experienced agronomist, the threat of extreme weather has always made farming an inherently risky affair. But we farmers are proverbial for both “manufacturing our own luck” and for being able to survive “unlucky” breaks with perseverance and aplomb. “That’s farmin’ for ya!”

However, the recent changes in our weather are more than just proverbial, incidental – they’re cataclysmic and unceasing, and they’re hurting small farmers everywhere, along with many of the bigs. I personally recall several market farming friends and associates right here in the Valley, “packing it in” after enduring several seasons of dire weather, with the bitter rejoinder: “I guess we weren’t meant to farm now, after all!”

There are no hard statistics yet on farms and farmers ruined by manmade climate instability. Yet, how deeply it must already be impacting all farmers, vocationally, psychologically, existentially, that an “anomalous” act of nature could, in a few days or hours, wholly liquidate all the hard work of even the most skilled and diligent practitioner! I recall incredible 2011 video images of tsunami waves devouring hundreds of hoophouses and coastal farms in NE Japan. We cannot possibly know whether this particular earthquake had anything to do with climate change. But in farming today, apparently, you need not only to be “good”, you also need to be prepared to lose everything to a drought, a flood, a fire, or a ‘super’ storm.

Within these changing parameters, farmers are either abandoning the field or scrambling to more cleverly occupy their field, urban lot, rooftop, hoophouse, barn or backyard foodscape, despite them. But, no doubt about it, traditional farmers, as well as all those permaculture-inspired intellectuals, peasants and foodies (who’re yet gung ho, despite worsening weather risks) are today called to be not only more nimble, resilient and perseverant, but possibly also to entirely reinvent ourselves, exploiting new angles, new plants, new seasons, new products, new methods and new niches. This is shocking… but not necessarily a bad thing, perhaps, if it kick-starts us ultimately toward more ecological and “weather-sustainable” practices.

In our enthusiasm to “cultivate the earth”, many new food growers, backyard gardeners, etc, still reflexively try to mimic commercial agriculture, with its ubiquitous tillage, straight rows, and dependence on machines, petrol and chemicals. But we’re living in a uniquely urgent moment as we grasp for greater carbon neutrality growing the good food we all need. This extreme weather has sharply challenged us all to question conventional growing methods like endless plowing and spraying, in favor of ones that highlight biological diversity, seasonal continuity, and discerning, hand labor.

Long ago, we in the West were duped by the premise that science and technology (and free markets) could rescue us from our worldly excesses, and that simple, low-tech, “grassroots”-oriented approaches, like “conservation” or “home grown food” were idealistic and ineffectual in the face of our massive-scale global problems. But if you look to history, sometimes the biggest problems need to be broken into smaller pieces, and often the best solutions are the simplest ones, hiding out in plain view.

In these dangerous times, many are left shell-shocked and believing in the impossibility of common citizens to affect change, to be part of any solution. But one prescription is obvious. Growing food by hand offers anyone, anywhere the concrete, delicious optimism of healthy sustenance, as well as a renewed connection to Nature, to oneself, and to others. Growing food on any scale is awe-inspiring, solution-oriented work; it is inherently proletarian, generous and self-reinforcing, and it is one of the most sensuous and primal endeavors, to boot! Growing food is the consummate healthy path, for body, mind, spirit, AND for the greater community at large.

Today, everywhere, the need for healthy, local food is huge, and increasing. And since today, anyone, anywhere can be a bona fide, food producer, all of us are deputized, “citizen farmer” with all rights and responsibilities conferred. This is a great and timely blessing, indeed; just what the doctor ordered!

Go forth, people, go forth and "mulch-apply"!